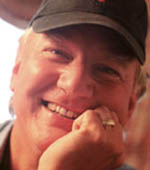 Tom Peters has been called the Ur-guru (guru of gurus) of management -- and compares him to Ralph Waldo Emerson, Henry David Thoreau, Walt Whitman and H.L. Mencken.

The Economist tags him the Uber-guru, and his unconventional views led Business Week to describe Tom as "business' best friend and worst nightmare."

Tom describes himself as a prince of disorder, champion of bold failures, maestro of zest, professional loudmouth (as a speaker he's "a spitter" ... according to Dilbert), corporate cheerleader, lover of markets, capitalist pig, and card-carrying member of the ACLU.

Tom & Bob Waterman co-authored In Search of Excellence in 1982; the book was named by NPR (in 1999) as one of the "Top Three Business Books of the Century," and ranked as the "greatest business book of all time" in a poll by Britain's Bloomsbury Publishing (2002).

Tom's series of books on Reinventing Work were released in September 1999: The Brand You50, The Project50 and The Professional Service Firm50. In 2001, Tom began a new chapter in his work with the electronic publication of 13 "Manifestos" in what he calls the "Brawl with No Rules Series."

Tom presents about 100 major seminars each year, has written hundreds of articles for various publications, and serves as Chairman of Tom Peters Company. When he’s not on an airplane, Tom and his wife Susan Sargent (and Max and Ben) co-habit a 1,500-acre working farm in Tinmouth, Vermont ... along with alpacas, chickens, goats, horses, barn cats, sheep, geese and dogs (Rosie, Hummer and Wally ... two of whom sleep on the bed).

"All business success rests on something labeled a sale, which at least momentarily weds company and customer." -- Tom Peters

"Celebrate what you want to see more of." -- Tom Peters

"Communication is everyone's panacea for everything." -- Tom Peters

"Design is so critical it should be on the agenda of every meeting in every single department." -- Tom Peters

"If a window of opportunity appears, don't pull down the shade." -- Tom Peters

"The magic formula that successful businesses have discovered is to treat customers like guests and employees like people." -- Tom Peters