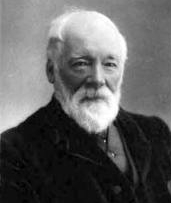 Samuel Smiles wrote one of the earliest personal development books, appropriately titled, Self-Help. Smiles has influenced countless people through his work. While he lived many years ago, his influence is still alive and well today. In fact, Sakichi Toyoda, the founder of Toyota Motor Corporation was a big fan of Samuel Smiles's book Self Help.

Samuel Smiles was a strong advocate of material progress based on individual enterprise and free trade.

His book, Self-Help was originally rejected by the publisher, yet undeterred Smiles went on to publish the book at his own expense and risk, retaining the copyright. It sold 20,000 copies within one year of its publication. By the time of Smiles' death in 1904 it had sold over a quarter of a million.

Smiles argued that self-help provided the best route to success. His book Self-Help, which preached industry, thrift and self-improvement was published in 1859. He also wrote a series of biographies of men who had achieved success through hard-work.

Some of the self-help related works he authored include:

"Enthusiasm... the sustaining power of all great action." -- Samuel Smiles

"An intense anticipation itself transforms possibility into reality; our desires being often but precursors of the things which we are capable of performing." -- Samuel Smiles

"Life will always be to a large extent what we ourselves make it." -- Samuel Smiles

"A place for everything, and everything in its place." -- Samuel Smiles

"Men who are resolved to find a way for themselves will always find opportunities enough; and if they do not find them, they will make them." -- Samuel Smiles

"Lost wealth may be replaced by industry, lost knowledge by study, lost health by temperance or medicine, but lost time is gone forever." -- Samuel Smiles