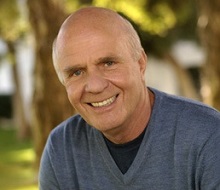 Dr. Wayne W. Dyer, affectionately called the "father of motivation" by his fans, is one of the most widely known and respected people in the field of self-empowerment.

He became a well-known author with his bestselling book, Your Erroneous Zones, and has gone on to write many other self-help classics, including Meditations for Manifesting, Staying on the Path, Your Sacred Self, Everyday Wisdom, and You'll See It When You Believe It.

Despite his childhood spent in orphanages and foster homes, Dr. Dyer, who has a doctorate in counseling psychotherapy, has overcome many obstacles to make his dreams come true. He spent much of his time showing others how to do the same.

When he wasn't traveling the globe delivering his uplifting messages, Wayne was often writing from his home in Maui, Hawaii.

"Anything you really want, you can attain, if you really go after it." -- Wayne Dyer

"Be miserable. Or motivate yourself. Whatever has to be done, it's always your choice." -- Wayne Dyer

"Doing what you love is the cornerstone of having abundance in your life." -- Wayne Dyer

"Begin to see yourself as a soul with a body rather than a body with a soul." -- Wayne Dyer

"Deficiency motivation doesn't work. It will lead to a life-long pursuit of try to fix me. Learn to appreciate what you have and where and who you are." -- Wayne Dyer

"Each person must decide for himself what he wants each day. As a leader, I will expose you to the options and the likely consequences of those options. I'll even share my opinion if asked, but I'll never confuse it with the opinion, which simply doesn't exist." -- Wayne Dyer

"Go for it now. The future is promised to no one." -- Wayne Dyer

If I could define enlightenment briefly I would say it is "the quiet acceptance of what is." -- Wayne Dyer

"Judgments prevent us from seeing the good that lies beyond appearances." -- Wayne Dyer

"Live one day at a time emphasizing ethics rather than rules." -- Wayne Dyer

"Maxim for life: You get treated in life the way you teach people to treat you." -- Wayne Dyer

"There is no scarcity of opportunity to make a living at what you love; there's only scarcity of resolve to make it happen." -- Wayne Dyer

"Our lives are a sum total of the choices we have made." -- Wayne Dyer

"Self-worth comes from one thing - thinking that you are worthy." -- Wayne Dyer

"Stop acting as if life is a rehearsal. Live this day as if it were your last. The past is over and gone. The future is not guaranteed." -- Wayne Dyer

"What comes out of you when you are squeezed is what is inside of you." -- Wayne Dyer

"When you dance, your purpose is not to get to a certain place on the floor. It's to enjoy each step along the way." -- Wayne Dyer

"When you judge another, you do not define them, you define yourself." -- Wayne Dyer

"What we think determines what happens to us, so if we want to change our lives, we need to stretch our minds." -- Wayne Dyer

"You are important enough to ask and you are blessed enough to receive back." -- Wayne Dyer