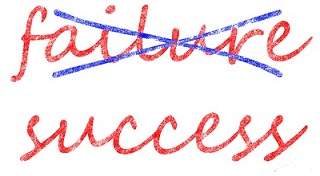 For many people, the idea of failure is simply not on their agenda. Not doing something the right way, or failing to get something right. It’s not something they can even comprehend. It’s the worst thing in the world to fail for some people.

It proves they aren’t invincible, that they simply aren’t good enough to do things anymore. When this kind of mentality forms, though, changing and progressing as a person soon becomes pretty impossible.

When you cannot control your life and the things that you are inevitably going to fail at, you need to realize that this isn’t some massive problem on your part. Everyone fails at something; the most important thing that you can do, though, is learn how to fail and actually make it count.

Failure isn’t the end; it’s merely the beginning of the next attempt. Failure does not leave you as the only person without an option – it leaves you with a fresh new option. You try again; you do it all over from start to finish. Whatever the problem was along the way — you’ll find the solution next time, or the time after.

The most important thing about failing is:

Accepting that it will happen – nobody is Midas, and everyone will fail at something at one stage in their lives. That it will happen to you often, and that you need to get used to being analytical about failure. Finding out the reason why is far more important for your development as a person, a professional and a human being than it is to simply just accept it was bad luck or a twist of fate.

Failure occurs because we don’t know what we are doing and, more importantly, we don’t know how to learn from the mistakes we have made that caused us to fail in the first place. It’s vital to learn from your failures, and this is known as the Art of Failing. Failing in a way that allows you to become a better person, more successful or more experienced, is far better for the character than only just succeeding and never really improving or looking at how to genuinely improve at whatever it is that you do.

To get to this stage in life, though, you need to be prepared to harness the power of failure. Doing so takes a lot of hard work and determination on your part, and will typically require you to think about the following:

What caused you to fail? Was it a lack of preparation? Not enough knowledge? Not enough time? Find out what seems to be the common denominator in all of your failures and find out the reason why this keeps occurring.

What makes you do this in the first place? Look at the kind of mindset you have when failure occurs; did you get too nervous? Were you following poor advice? Was it just what you thought was the best thing to do?

Look at these kinds of situations and these kinds of thoughts, and you will start to find that getting the solution that you require will no longer be the Everest that it had once seemed. When you break it all down and you see what you were failing at in the first place, and what took you into the mindset to fail in the first place, you can start to actually find the solutions that you need.

Perfecting the art of failure is all about being able to actually accept failure, and then use it as a springboard towards genuine success and improvement in the years to come. How you do this, of course, is not something that you can really think about and until you understand how you failed in the first place.

Getting to this phase is the most important thing that you can do as an individual, as it will give you all the information that you could possibly need about how to actually make failure work for you.

Nothing is better than redeeming yourself and completing a problem that you once caused – it will help you emerge a better person, more experienced and more prepared for your failures.

You have a much better chance of succeeding in life if you are able to actually use these failures as springboards along your success journey – than if you just happened to get there and succeed at everything, because the time you finally fail will be far more difficult to deal with. Get used to failure, learn from it, and you can make it work for you!
_______________
Carl Preston is the founder of WhyDontYouChange.com, the ultimate self-development site.