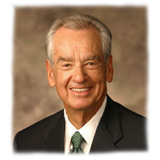 I’m the only one who does anything around here! Several years ago I was on a late-night television show in New York City. For some strange reason, they wanted me in the studio that afternoon at 4:30.

I walked in and was stunned by the small size of the reception area. It contained a couch for three, a chair for one and a sink, refrigerator and coffee maker.

As I sat down a woman walked in, shook her head and said, “Nobody makes any coffee except me!” She got busy and started a fresh pot of coffee.

A few minutes later a guy walked in and, following the same procedure said, “I can’t believe it! This place would be a pig-pen if it weren’t for me! I’m the only person who ever does any clean-up,” and he cleaned up the small area.

Still later another woman walked in and complained, “Nobody ever puts anything up but me,” and she proceeded to put things away.

Interestingly enough, all three of those people sincerely felt they were the only ones who ever did anything. Each one did their own private halo-adjustment as they went through the process of “making up, putting up and cleaning up.”

Question: Is that the way it is in your company, where “nobody does anything,” but everybody thinks they’re the only one who actually works?

Thought: If that is true and you are the only one who does anything, think of the incredible advantage that gives you. Not only do you have job security, but the opportunity door is wide open for your move to the top.

However, if you have a chip on your shoulder, if you honestly feel that you do everything and you share that feeling with others, your bad attitude negates your good work. So, stay busy, keep working, smile about it and your good attitude about “doing everything” will catch up with you.

Think about it and I’ll see you at the top!
_________
Zig Ziglar was a motivational speaker and author. His work continues to inspire people all over the world to pursue success and go for their dreams. Learn more about him at www.ziglar.com

* Learn about Zig Ziglar’s book Staying Up, Up, Up In A Down, Down World